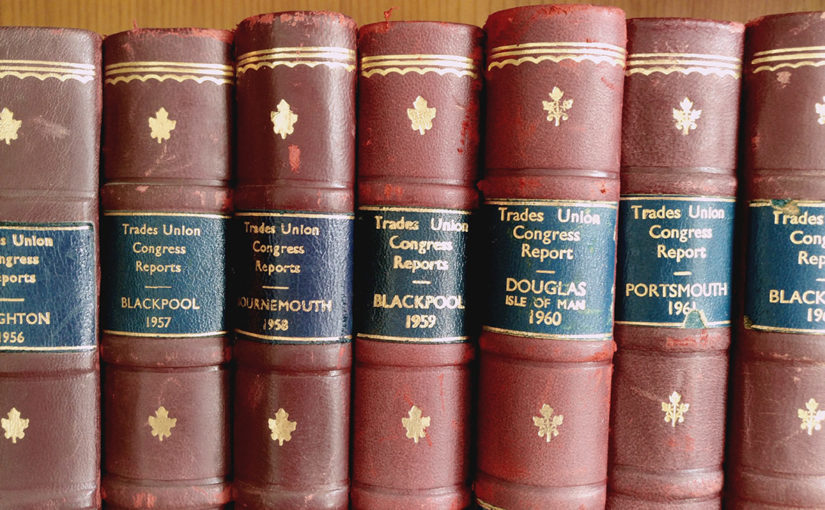 Anyone who’s been to the TUC Congress or any other big motion-based union conference knows about the paper. While democracy is the intention, a heavy bag of paper is one of the products.

For Congress, the papers include the Programme of Business, the Final Agenda, the GPC Report, which includes composite motions, emergency motions and General Council (GC) statements, and the GC report – all of which are essential to following the business of Congress. Delegates spend a lot of time looking back and forth between the books of paper trying to keep track of what’s going on.

Many delegates will have experience of popping out of the hall for a bit, meeting someone and having a bit of a chat, and then coming back in and struggling to find out where the business is at – is it a motion in the Final Agenda, a composite in the GPC Report or a section of the GC report?

A few months ago, I started working with the TUC on building a prototype for something to make this a lot easier. After a bit of brainstorming, I decided to focus on the motions first as they make up the majority of the business of Congress and are most liable to change and move around.

I starting thinking about how WordPress blogging platform could be used to do this – every motion a post, using tags and categories to organise them. Once I learned how to display posts in chronological order, I had it. I built a basic test version and then a fuller proof of concept version.

Once that was done, it left the other documents, particularly the GC report. Congress is the opportunity to hold the TUC to account on its work of the previous year and questioning the GC report is the way to do it. The challenge is that the report is still a very weighty document and is published as a physical book.

The additional challenge of building an interactive version of the GC report is that delegates have told the TUC that they like the ability to annotate their copy. Maintaining that ability digitally is a challenge.

We looked at a couple of sharing/collaboration systems, but none met the usability requirements we have. Systems like Box.com offered good extensibility for sync and annotations, but would need a lot of user help to set up the more advanced functionality to people who might not normally be “power users” of their own devices. Instead, we focused on the ePub versions the TUC already produces.

Last week, we held a user-testing session with two union activists. One is a young member with strong technical skills who’s attended Young Workers’ Conference, but never been to Congress. The other is an experienced union lay leader who has been part of the TUC’s equality strands and has been to Congress a number of times.

The testing was very instructive, highlighting the need to properly introduce union members to ePub functionality. While very useful and offering the opportunity to search and annotate files digitally, they’re not completely straightforward. Many people will have devices without the relevant Books app needed to open them. Also, adding annotations isn’t the clearest thing when viewing files on a phone.

Testing the prototype WordPress site was very successful.  While it identified some tweaks that could be made, both participants found it easy to use. The real-use-case experience of our testers helped identify benefits to the prototype that we’d not even thought of – such as the ability to share a direct link to a particular motion or text segment on social or by messaging.

However, when carrying out some tasks, the need to switch between the site and ePubs to follow all the business of Congress was described by one participant as “horrible”.

This presents a challenge to the entire publishing strategy of the TUC – to create a web-accessible version of the GC and GPC reports, and present them in a very different way to that which has powered the event for many decades. This could allow people to follow the business via integrated websites and only rely on epubs if delegates wanted the annotation functionality (not currently available in browsers).

Technical issues were also identified – access to power so that batteries don’t run out, access to strong enough wifi so people can download files and access the website. Server and network level caching was a useful finding – there’s no point in updating a site if people can’t see the most current version.

In all, I think we identified the first steps in creating a completely paper-free option for those coming to Congress. Rather than lugging around heavy bags of paper and needing to spread out on tables like an exam hall, delegates might soon be able to carry everything they need around on the phone, table or laptop, and get to what they need with less hassle.

Donnacha Delong is a freelance agile and digital consultant, and lay organiser with the National Union of Journalists.