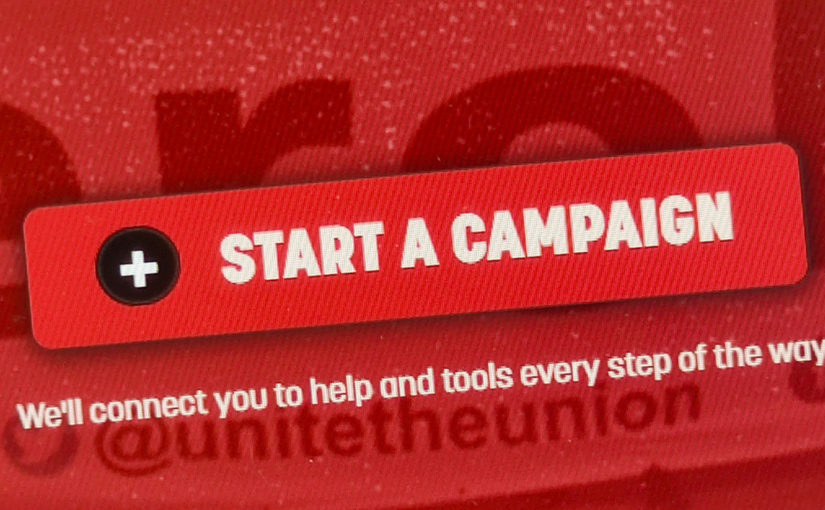 This week, colleagues from 10 TUC unions came together at a Digital Lab office hours session to share thoughts on digital campaigning. Here’s a note of some of the points we discussed.

We started the session with a quick discussion of some of the different priorities unions may have in seeking to develop their digital campaigning. These will differ for unions who have different issues, structures or member characteristics.

Improving digital campaign capacity in the union can help increase the speed and reach of campaigns. This can add impact to a wide range of existing campaign tactics, as well as adding new tactics to your campaign toolkit.

Optimisation is helpful here too. If you are able to analyse actions, learn what works for your members and build the responsiveness of your campaign mobilisation channels, you can be much better able to seize chances at key moments in a campaign.

Most of our unions have a large number of less engaged members, some of whom may see the union more as a service than as a cause they want to be more involved in. Exposing these less engaged members directly to the union’s campaigns (even if this starts small with a low bar ask like a petition) is a great way to excite them about being part of something.

A longer term view on member engagement can help build members’ willingness to become more active in the union over time. It’s a tactic well used in the NGO world, where “ladders of engagement” seek to offer new ways to get involved to people who take initial steps.

This can be particularly useful for unions of independent workers without a strong tradition of workplace based action. It can give isolated members more opportunities to see each others’ needs, and to see the union as a campaigning force.

Often we have best channels to mobilise our members, but other groups of stakeholders could also be receptive to our campaigning, and offer particular opportunities for leverage. For example, train drivers campaigning on safety could find strong common cause with regular train travellers.

We saw the power of this tactic in the powerful School Cuts campaign, run by NEU with other education unions. It gathered a list of hundreds of thousands of parents and mobilised them to take real world actions as well as contributing to political lobbying. This kind of direct supporter engagement offers a powerful way to build solidarity in a media environment which is often hostile to unions’ aims.

Unite have been developing online campaigning as a strand of their leverage strategy in disputes. They’re finding ways to mobilise community support towards a wider range of targets online, as well as in offline action locally.

Online campaigns are perhaps the clearest way to explain a situation to relevant groups of workers. A good online petition shows a clear theory of change – establishing what the problem is and who is affected, shows who is standing in the way, and provides a way for a potential supporter to see how they might have a degree of agency to overcome this.

It’s also the most shareable form of content, which is key to organising. When someone signs a petition, they are at their most motivated to take further action. Online campaign tools are often optimised to suggest supporters share it onwards to friends. That’s particularly valuable where reaching out to groups of workers, who are likely to be connected to colleagues online, spreading a message amongst the most relevant groups you need to see it.

This is an approach we are seeking to develop with the TUC’s Megaphone campaign platform. It allows for supporters signing petitions to tick a box if they’re affected workers. Email segmentation then lets us use this to contact these new potential members – offering them surveys from the union, contact with organisers, online organising calls and more.

Eric Lee of LabourStart has been working on international solidarity campaigns online for 20 years, stuffing the inboxes of employers and governments in solidarity with unions and unionists. He joined us to present 5 things he’s learned as a pioneer in union digital campaigning.

And finally we decided together on three topics to talk about in greater depth in breakout rooms. Here’s a bit of how the conversation went:

How can you do online campaigning when you don’t have many resources?

This is a big problem for many smaller unions, who find it hard to rent some of the most cutting edge campaign tools out there. But there is still a lot you can do. We hit on three ways to get started in online campaigning on a budget.

One big area to be aware of here though is the risk of ‘shadow IT’. If you don’t have a dedicated toolset for doing this that’s on your data protection officer’s radar, you could find campaigners and branches throwing up dozens of accounts for different free online services, and losing oversight of lots of sensitive personal data. For more on tech stacks and shadow IT, see this workshop writeup.

How can we use engagement ladders in organising?

Getting people to move from online to offline action is an important part of increasing their union activism. One legacy of the pandemic is that there are now divisions about attending events, protests and meetings. Either from concern about contact or preference for online.

And where events are happening, this also relies on networking branch activists to deliver activity locally, mobilising people nationally with digital systems. Distributed events may form a part of the answer here – this week’s leafletting for the #demandbetter demo saw activity at rail 83 stations by activists, and hundreds of attendees signed up to help out via a “find my event” map, based on their activity in having signed up to online petitions.

Unions may find one of the biggest challenges here to be the analytics in running lots of different engagement ladders for employers or localities. It’s intensive in terms of the technology needed (ideally a dedicated campaign CRM like Action Network), but also the staffing to personalise high value but small group communications.

For example, with a GMB Amazon campaign run through the TUC platform, it was possible to segment from thousands of petition supporters to find those living close to Ashford in Kent. Approaching them managed to recruit 6 people to attend a public consultation on construction of a new Amazon depot there. This meant tailoring comms to a small number, but the value of turning out local residents to work with GMB organisers at the event was high enough to justify this.

We discussed potential approaches through the prism of some long term campaigns that unions had run – Nautilus’ campaign at P&O and Unite’s with BA cabin crew.

It’s important to do the work at the start of a campaign to define the campaign objectives, and to make sure everyone working on the campaign is on the same page with this. This foundation helps you create a narrative and identify smaller campaigns and individual actions that will make sense for members to build together into a longer series of work.

Demonstrating progress as you go is important. Reflecting back success helping people see that their engagement is worthwhile – even if those successes are only partial. Share news coverage, high profile endorsements, messages of thanks from workers in dispute, video from events. This all reminds supporters of their ongoing involvement in a campaign and makes it more likely they will respond positively when you do need to mobilise them for the next step.

It’s also important to find ways to update people and keep them engaged when things aren’t going so well. Linked to this, putting a time frame on individual actions is important. Leaving actions running without updates makes them look less impactful and will reduce supporters’ belief in your theory of change and their willingness to act the next time.

Collaboration is a helpful way to add variety to longer campaigns. Partnering for an action with external organisations like LabourStart or relevant community groups can make a similar tactic feel new. It can also help bring more people into the campaign, which helps show momentum is with you. Exchanging actions – where you endorse another group’s related action as a secondary ask to your supporters and they endorse yours – is one way to build more noise overall and to grow your campaign’s base of support.

And related to campaign planning, it’s a good idea to define your exit strategy from a campaign. It may make sense to take a break to focus on other topics, and return when the moment is better, than to try to maintain too many priority campaigns at the same time, making it harder for your supporters to keep track of what is going on.

What do you want to talk about next?

We’re always looking for topics for other informal office hours sessions, so if there’s something that you’d like to chat with your peers in other unions about, please do get in touch!