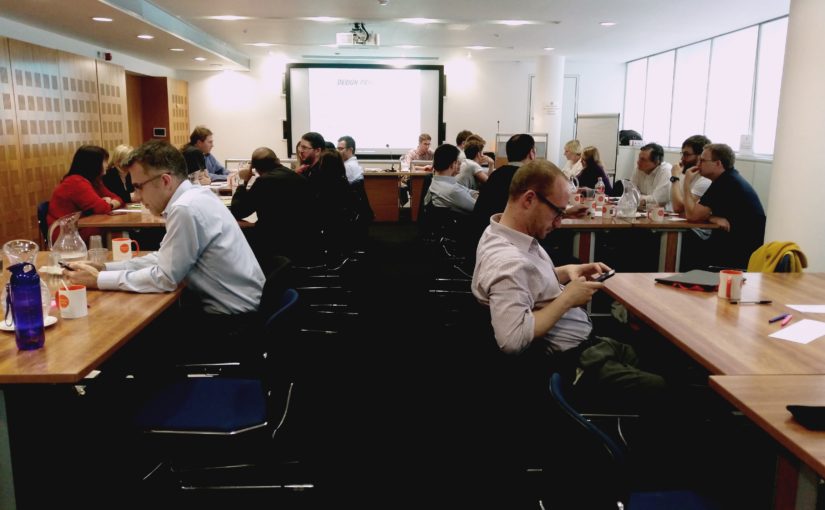 This is a write up from a practical workshop we ran at the TUC on improving online joining processes in unions. We had 30 attendees with a broad range of staff functions including IT, comms, membership, organising and leadership, and representing 16 union organisations.

The workshop was devised and led by Sam Jeffers of The Shop, who has worked with UNISON and Prospect on recent join form change projects, with help from John Chadfield of product design agency White October.

You can read an introduction to the issue on our blog here.

Online joining is a really important area of work for unions at the moment. There’s the potential to make fast gains that impact the bottom line.

But it’s also a kind of gateway drug for digital transformation in unions. To get the best results, we’ll need to work to digital principles of being user-focused, testing and iteration, honest evaluation, and openness to different perspectives. It’s also a great first step to take in working across a whole range of problems unions need to tackle. Digitise joining and you can then work on areas up and down the member journey:

Projects like this, that go right to the heart of the organisation’s core business, are often complex more than complicated – by which we mean they have a lot of moving parts to line up, rather than that any part of it is conceptually difficult.

Our discussion asked which stakeholders were involved from around the union, which suppliers and contracts. We looked at who holds the budget and where ideas could come from.

In planning a project that’s more likely to succeed, it can help to identify and plan for the ways that we might fail. Any project has to overcome barriers, but change projects doubly so. As things change, new barriers to that change appear.

We discussed where those problems might arise, and how we could turn any potential reason for failure into a problem that we can devise plans to overcome.

First we looked at a set of broad design principles that could inform all parts of the work (and other digital design projects):

And we looked at opportunities to measure impact. Choosing the right metrics will be helpful in evaluating any changes, and choosing which further areas to pursue. Looking at conversion rates as well as just the numbers of new members will help understand the difference our work is making. Metrics like additional income or growth in target segments could also help in making the case to stakeholders and leadership.

These need to sell the union and the idea of union membership. Looking at the web pages for many new mobile app based businesses gives us a rough format that works well. At the TUC, we’ve used this process in developing the landing page for the WorkSmart app for young workers – getworksmart.co.uk

Next step is to work out what data you are asking for on the form. Look over your current form and check each field you currently ask members for (as well as any new ones your colleagues may want to bring in). See if that piece of data will meet these 5 tests:

The workshop looked at elements of form design that made it easier for users to provide the data and get through the process. Think about how you want users to feel whilst they’re completing the form and joining the union. This leads to a number of pointers that many prototypes in the workshop picked up on. Here are a couple of examples:

We used Marvel App in the workshop, to convert paper pages into rough and ready prototypes that we could use to demonstrate to stakeholders, or to do initial tests with users.

Paper prototyping of sketched pages works as well though. For a slightly more polished approach, a Google Slides slideshow presented on a mobile, or a Typeform designed form (without the backend integration) could be useful ways to conduct tests without needing to do any development at all.

Here’s one of the Marvel prototypes – one rather creative team decided to make theirs around a fictional union rather than tackle one of their own real examples!

So where should we all go from here? The workshop identified a set of next steps for individual unions to take.

What could unions work on together?

We’ll be doing more work on this issue at the TUC, including building on campaign-focused joining tools that we’ve already run pilots on. We’re keen to hear from unions that want to work together or run interesting pilots.

And if you just want to hear more about it as we go, sign up for our newsletter on our own TUC Digital joining form 😉