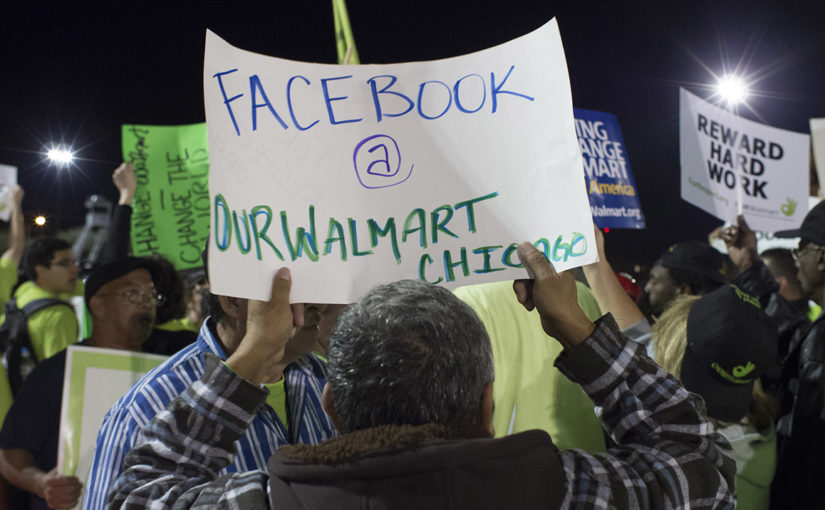 Digital offers unions ways to reach out to workers that we’d find hard to access traditionally, due to hostile employers, geographical dispersion or limited organiser resources. It can also provide powerful practical tools for workers to network and organise. But the benefit can be all the greater when you combine the two.

It’s something that’s working well for the OUR Wal-Mart campaign in the US, as campaign director Dan Schlademan and Tim Lyons of Reveille Strategy told a group of UK trade unionists this week at the TUC.

Using an AI powered advice and community app called Work-It, they have made a calling card and member journey for the union that makes worker organising feasible even in a huge and anti-union employer like Wal-Mart. It works in a circular way.

This gives this the network an additional strength, which has been crucial to its success. A centrally organised campaign could have been more easily shut down by Wal-Mart, who have spent millions on a combination of unionbusting, surveillance and PR around the campaign. But the campaign is now decentralised, and activity and leadership are able to flow around the whole network with much greater resilience.

This online to offline route represents a big opportunity in working at employers like Wal-Mart. Everyone has a smartphone. The atomisation many feel at work means workers are naturally going online to find support.

The key is to find low bar online asks and content that hook people in and then get them more closely engaged. Then they can move users offline to build action.

This also focuses the resources of the organisation. Organisers don’t have much direct involvement with workers coming in through the initial stages of the journey. The large numbers of workers entering the journey are still delivered real value – it wouldn’t work otherwise – but organiser time is a precious resource, so the AI and User-Generated Content help get workers to a stage where organisers are able to target their interventions to those they know will be more active and receptive.

The app came about as OUR Wal-Mart initially had success in growing their network purely through Facebook groups. They have hundreds of these – mostly closed and mostly grassroots-originated. They might be based around particular workplaces, but could as easily be about humour or lifestyle themes, uniting workers across stores. One popular one is about juicing for health for example. They help grassroots leaders use their own passions to engage with others, and they generate great content that the wider campaign can use across their social channels – far more authentically than centrally produced messaging.

Facebook is still their largest channel to reach out to new workers and promote the campaign, but they were concerned they needed to develop their own engagement tools, rather than relying solely on a 3rd party corporate service that they didn’t control.

And Work-It is now spreading out from the Wal-Mart campaign, with other union projects using the tool in the US and Australia, with discussions ongoing in other countries too. Some unions are choosing to use it as a member-only contact channel in organised workplaces. Others are using it more like the Wal-Mart model, as an initial engagement tool that can recruit people into membership.

Tim and Dan have developed project methodologies that help get new versions running and embedded more quickly – training up the AI and sourcing the content it needs to help it learn, and conducting remotely delivered war-room training programs to get organisers and grassroots leaders the skills and experience they need to run a campaign like this as quickly as possible.

It’s encouraging to see how well the principles behind OUR Wal-Mart are working in building scale and depth in the campaign membership. At the TUC, our work on our new engagement tool WorkSmart aims to make use of similar principles to find workers that have been hard for us to reach in the past, and get them active in workplace campaigns and unions. UK unions have a lot to learn from the work going on in the States and Australia, and we’ll be following their progress closely.

You can see slides from Tim’s presentations here, and download a useful research note on digital toolkits for campaigning and organising.